It has been 99 years since the first Women’s Day was observed in February, 1909. In 1975 the United Nations proclaimed March 8 as Women’s Day. Today women in Spain are on strike, banging pots and telling men to fix their own dinners. Women in the Ukraine are holding signs that say, “We are Wonder Women.” In France the daily newspaper Libération is charging women the usual 2 euros, but men must pay 2.5 euros to highlight the disparity between men’s and women’s pay.

In 1909, about 15,000 women marched in New York for the right to vote, for better pay and for a shorter workday. Women earned the right to vote the next year, and their pay and workdays have improved since that time. However, women, who are about half the workforce and earn more college and graduate degrees than men, still only earn 80 cents for every dollar earned by men. For women of color, the situation is even worse. If the amount paid to women improves at its current rate, white women will reach parity with men by 2059. Black women would have to wait until 2124 and Hispanic women until 2233.

That is the discouraging news, but there is encouraging news as well. I only have to look at the amazing women in my own family to know that we are making progress. 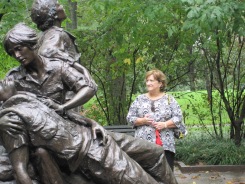 This is my sister Stephanie, who served as a nurse in Vietnam, and then ran her own business. 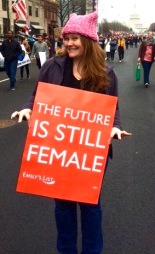 This is my niece Sharmel, who endeavored to provide food to developing countries, and now works in the State Department. 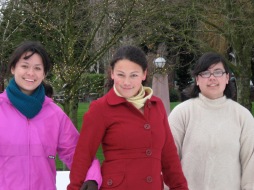 These are my granddaughters, ice skating when they were 19 and 20 years old. Almost a decade later, Joanna (on the left) is completing her Ph.D. and is a fantastic mother. Elizabeth (in the center) just opened her own restaurant in Los Angeles, and Phoebe (on the right) works in publishing in the Dallas-Fort Worth area. All are accomplished women.

As I sit here in my purple shirt, one of the suffragists’ colors, I do seethe a bit at how much progress we still need to make, but I bask in the knowledge that so many women today have come so far.