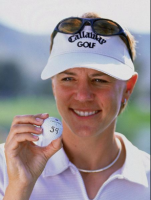 I am struck by two things about Annika Sorenstam’s career as a golfer: her persistent rise from one first for women to another; and the fact that, even as late as 2003, she experienced discrimination because of her gender.

Annika was born in Sweden where she excelled in sports: she skied so well the coach of the national ski team invited her to train in northern Sweden; she played tennis so well she was a nationally ranked junior player; and, for fun, she also played soccer. She was only twelve when she started playing golf and, before long, golf was her consuming passion. She won tournaments in high school and was the first foreign-born freshman to win the NCAA Championship in the U.S. when she played for the University of Arizona.

Annika’s string of firsts in golf came through her performance and her earnings. A few highlights:

–first woman to earn over $2 million in one year

She was also the first woman, since Babe Didrikson Zaharias in 1945, to be invited to compete in a PGA tournament. Even after all her achievements and, even though this invitation was extended in the modern era of 2003, some of the men of the PGA reacted negatively. Nick Price, the defending champion called Sorenstam’s presence a “publicity stunt.” Vijay Singh withdrew from the tournament saying Annika had “no business” competing with men, a statement for which he later apologized. Although she missed qualifying for the tournament, the press was filled with news of her graciousness.

In her second career Annika manages a golf course design company, a clothing design company, a company that provides personal services for athletes, a vineyard, and a foundation. She also runs a “boutique” golf academy where her sister, who also played on the LPGA Tour, is one of the coaches. Her persistence and achievements continue.